The stylophone was one of those things that I really wanted when I was younger – like the Atari and other ‘toys’ I never actually got. I remember constantly seeing Rolf Harris in my magazines/comics advertising the stylophone and I thought I’d become a stylophone master!

So when I was asked if I’d like to review one, well, my childhood dreams woke up and gave a little whoop.

The stylophone looks almost identical to how it did originally, but has had a bit of a technical makeover by Re:Creation to bring it slightly up-to-date

For those of you that don’t remember the Stylophone, its basically one of the original home synthesizers. It even used a stylus before the iPad was in nappies and has been used by the likes of David Bowie and more recently, Mark Ronson, gaining it that cult status so few musical instruments ever receive 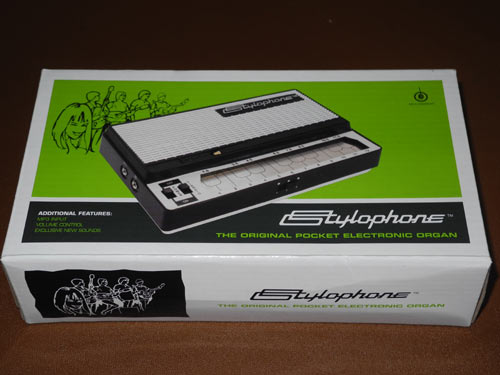 Even the box gives me nostalgic warm and fuzzies

As you can imagine, i love ‘toys’ like this and just handling the Stylophone made me really quite excited. Its exactly as I imagined it to be – a total Kitsch classic that’s great for kids and adults  alike. There are only two switches, the on/off switch and a vibrato switch which gives you that long bendy sound. There is also the new addition of a volume control.

The Stylophone comes with an MP3 connector lead and instruction booklet

You play the stylophone like you would a basic keyboard – using the stylus to play the notes, or slide it up and down. The sound is extremely electronic and sci-fi. Its a single-note keyboard, so no chords here, but that means you can be really creative and put some crazy beats behind you. That’s done via the new MP3 audio input so you can plug in your MP3 player and jam along.

I plugged the stylophone into my Macbook Air and started up Garageband. As expected, you can use the Stylophone as a simple external speaker, or use it to lay down a track using it as an instruments. Its very basic, but it works.

At this point, I was going to include some audio of me playing ‘The Saints Go Marching In’ against a crazy drum and bass looped backing track – but after listening to it back, I decided not to subject you to my noise pollution. I may have enjoyed playing it, but I don’t want to let everyone else suffer – my husband walked in as I was playing and told me to shut up! Then my daughter woke up asking what the noise was. Oops.

All in all, the stylophone is fantastic fun for your kids or brother or husband or dad. Wannabe musicians will love it, playing it on top of their favourite songs  and if you’re already starting to mix tracks, it offers a really unique sound. The booklet gives you a couple of example songs but if you have an old recorder music book, that would also work just as well.

The Stylophone is available from Argos for £14.99. There’s also a couple of other Stylophone products that have been added to the stable, including the Stylophone Beatbox (a mini drumkit, beatbox and bass) which is £19.99 and a mini stylophone at £9.99

2 Responses to Gift Guide – Review of The Classic Retro Stylophone