I was on a flight recently and got talking to the lady next to me. Her father was elderly and visually impaired and had a major issue with keying-in phone numbers and seeing the screen. It was of upmost importance for the lady that her father had access to a mobile, for many reasons, and she couldn’t believe that nothing existed to help people like her father.

A couple of weeks later, I was talking to a friend who’s father also didn’t want to get a mobile phone because he felt they were too complicated.

This maybe the antithesis of everything I love about technology, but the truth is there are a lot of people, both older and younger, who quite simply are nervous about mobile phones because they’re too difficult to use, the keypads are too small or the font sizes aren’t big or bright enough.

To give you some surprising stats, Emporia, the makers of the RL1, have just released some brand new research that suggests 20% of consumers find smartphones extremely frustrating simply because onscreen keyboards are too small for fingers.  The most recent OFCOM study showed that 95% of the over 65 age group do not use a smartphone.  For the 55-64 age group smartphone use was just 17%.

OFCOM also reported that 39% of over 65s do not use any of the functionality of a
mobile beyond making voice calls – that means no uploading of pictures; playing music;
gaming; or social networking.  Only 19% use the camera. In fact, the most used function of a mobile phone for this age group is the clock.

So quite clearly, whilst many of us are wishing of the latest iPhone, Samsung Galaxy or Nokia Lumia 800, there is a market out there for people that are just wanting  something that works for them. 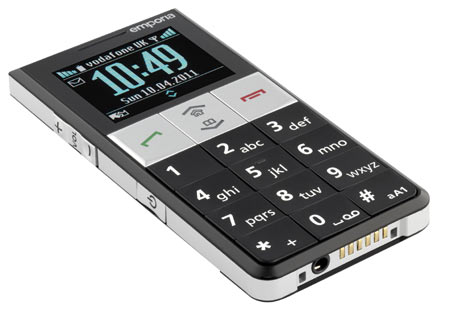 The RL1 is surprisingly tactile and very easy to use

When I was asked to review the Emporia RL1 phone, I had to forget about all those great apps I love, all the features, all the cute technology. This was a phone for people that don’t actually seem to be catered for very well. People that simply need a good phone that does what a phone needs to do in the clearest way – making and receiving phonecalls and text messages –  whilst also being ergonomically friendly for people that can’t use or see tiny keys.

The list of ‘doesn’t haves’ on the Emporia RL1 may seem like a huge negative to most – including me if I’m being honest. But for many people its a big positive. 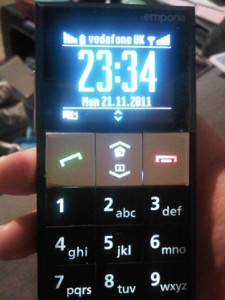 The screen is clear and the buttons large

When first picking up the RL1 I was surprised at how tactile it was. The phone, whilst very slim and light, seems chunky and the design really well thought-out.

Its the little things that really make this phone stand out. For example, there is a separate on/off switch on the side, rather than using the ‘end call’ button like most mobiles these days, which I know is extremely confusing for many people. The keypad is large and the clarity of the numbers and letters is really impressive. The screen is extremely bright and very easy to read – the font size is just right, but you can change it in the settings. When you press a key, you can feel it as you press it and know you’ve done it correctly.

There is also a torch button on the side of the phone, so you don’t have to fumble around for things in the dark. In fact, one of the first apps I often download on smartphones is their torch app – this is a built-in feature on the RL1.

Other features include a extra-loud ringtone – I can’t remember how many times my parents haven’t picked up their phone because they didn’t hear their ringtone, even though its on the loudest setting. The RL1 have already taken that into account.

Its not just the external features – the internal settings are highly intuitive – including quite a few things that the most advanced smartphone often leave out. For example, when putting the phone on silent, you can specify how long it goes on silent for, so you don’t forget later in the day and miss loads of calls. You can save your top 5 numbers to the start of the phonebook so you don’t have to scroll through – no complicated speed dial settings here. There’s a lovely birthday function that’s separate from the contacts or calendar settings so you can get reminders. 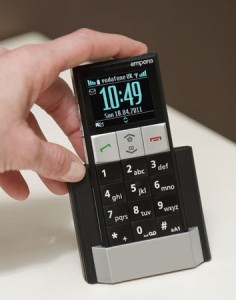 The RL1 cradle acts as a hands-free unit

The RL1 also comes with a charging cradle – no extra accessories needed here. Most impressively, the cradle also acts as a hands-free unit and can be easily screwed to the wall. Its extra’s like these that make the RL1 an excellent phone for its market.

The RL1 is a really nicely thought-out phone for older people – if your parents or grandparents won’t use their phone because its too complicated, this really caters well to them, or if you know someone visually impaired or issues with motor co-ordination. The only small negative I’d say is a lack of a camera. I do think that many people want a camera, or a way to add a photo to their phone just to keep it personal to them. Other than that minor quibble, the design is smart and clever – offering the basics without looking like a plastic brick.

The Emporia RL1 is only available via Vodafone (and retailers such as Tesco and  Amazon) and is free on contract or £75 with pay as you go.