Every so often the gadget geek freak in me reverts to being a 3 year old and gets way too excited. Even for me. When I was offered the opportunity to play, I mean review, ParamountZone’s new Lightspeed i-Helicopter, the first thing I did was phone my hubby..then my brother, the rest of the family and even some friends to tell them. A bit too excited perhaps? Probably. But its the kind of ‘toy’ I just love and is a perfect gift for husbands, sons, brothers – and of course geeky daughters and mums. 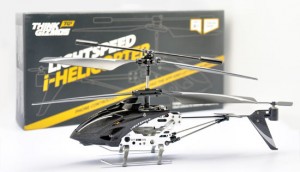 We’ve seen an influx of indoor remote controlled helicopters invade shopping malls across the country, but the iHelicopter is truly unique because you control it via an app on your ipad/iphone or many Android phones. All you need to do is search for the app on itunes (Copter Controller), or google it for Android, download it for free and you’re ready to go.

Another great thing about the iHelicopter is that you can recharge it rather than waste loads of batteries, like you would normally (a pet hate!). The initial charge is only about 30mins-1hr and each charge lasts 9 mins of hovering – which is a long time when flying these ‘Copters! 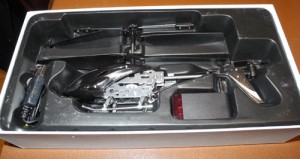 Everything is in the box

Setup was genuinely easy. The box has everything you need to start flying – the i-helicopter, a USB cable, the phone transmitter that fits in the headphone socket of your iphone/ipad (or Android phone), spare parts and thankfully, an instruction manual that is really simple to understand 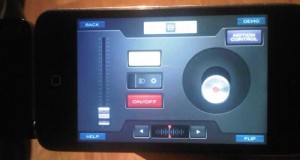 Once we charged up and downloaded the app, we switched on the i-helicopter and it started flashing blue and red lights. I don’t think I can fully describe my childlike excitement – maybe a small Squeeeee will do for now 🙂

The rotors started and we had lift off. And then it all came crashing back down to earth with a bang – actually, with more of a bounce as the helicopter seems to withstand the crash really well, demonstrating its sturdiness. I guess it takes a bit of practice to master the controls, having never really flown a remote helicopter before. But after a few minutes of figuring things out we got things working, despite some hilarious crashes.

Below is a short video of the i-Helicopter in action

The controller also has the option of ‘Motion Mode’ in which you can steer the helicopter by moving the phone rather than using the onscreen pad. Its clever little touches like these that make this gadget even more impressive.

I’d genuinely recommend the Lightspeed i-Helicopter. Its great fun and will keep your hubby or son (teenage son – 14yrs+ for this toy) occupied for hours, preferably months. Or if you’re as geeky as me, treat yourself.

Its currently on promotion for £29.99 at ParamountZone with free delivery, but I believe it will be increasing to £34.99 very soon so get in there quick!