I spent a lot of time when I was a student playing Jenga – its a great party game – so when I was offered to review a giant outdoor version of the game by the brilliant website, Garden Games (no, they haven’t asked me to say that!) I couldn’t wait to see it. 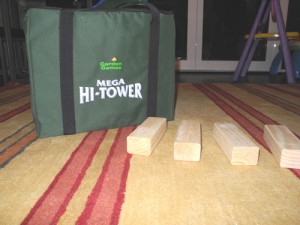 Outdoor Jenga is great for parties

The Mega Hi Tower in a bag is a fantastic outdoor game of Jenga with the solid wooden blocks reaching 1.25 meters in height when you initially build it.  The game comes packed really well in a compact lightweight bag so you can carry it around with you. In the Summer it would be a great game to play at a Barbecue or party or  take it to the park with you and some friends with a picnic 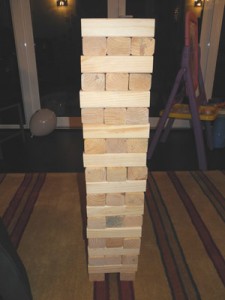 Its a pretty high tower!

It’s too cold at the moment to play it in the garden so I made some space and we played it in our conservatory.  A quick word of warning here – when the tower is built  the blocks are heavy and the idea is obviously for it to fall over so if you have little-ones, make sure you keep them away when others take their turn. I’d recommend probably 4yrs and older to play the game and it does state on the instructions that under 8’s need to be supervised – something I’d definitely adhere too. 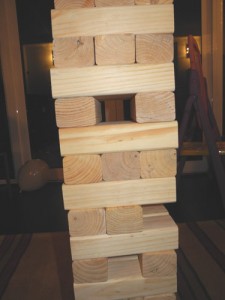 Remove a block from the middle and replace it on top

The game itself is great fun – if you haven’t played Jenga (and if not, why not!?) basically once the tower is built, each player needs to remove a block from the middle and replace it on the top – until it topples. The winner is the last person to place a block on the top before the next one make it fall over. Loser has to build the next tower!

I must admit, as much as I like playing it, I’m a bit rubbish at the game and I was usually the loser – I don’t know how people do it, but I’m the one that can never seem to find the slightly loose block that won’t make the tower topple. I usually just close my eyes, yank out one in the middle and hope. Apparently that strategy doesn’t seem to work. 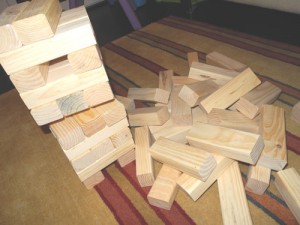 Another thing I found with the game is that when we’re not playing it, my little one loves using the blocks to build things – its like Mega Mega Mega blocks or something! So its really useful to keep around anyway so she can do some building.

The Mega Hi Tower would be a perfect game to play on Christmas Day and with a bit of alcohol, would most likely be funnier than the Christmas Day episode of The Royle Family!

You can buy outdoor Jenga (or Mega Hi Tower in a Bag – whatever you prefer to call it) for £49.99 directly from Garden Games on their website : http://www.gardengames.co.uk/acatalog/Giant_Jenga.html