Gift Guide – Light Up Your Skills With the iBall3

Every year there are a bunch of new games launched – some will make it, some will disappear without trace.  I’m sure this year will be no different.

However, one game that has been released and has stood out from the crowd recently is the iball3 – its being viewed as one of the ‘must-have’ toys of 2011 and The Gadget Show has already given it the mantle of top new toy this year. 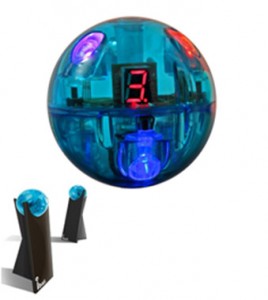 An ingenious blue ball that really tests you

The iball3 sits firmly in the category of ‘brain-training’ games that has made such inroads in the last few years, largely via game consoles and the Nintendo DS. However, this is a standalone electronic game that cleverly uses an online leaderboard to showcase the best players.

Suitable for ages 8yrs+ the iball3 is basically a clear electric blue ball with 6 light buttons and an LED display.  The object of the game is to turn on all the lights to the same colour within a specific time. If you remember the old ‘Simon’ game (which has also had a revamp and re-release this year), iball3 is a bit similar in that it uses light patterns, but its way more challenging and uses multiple light sequences

Each ball has a unique code which allows you to compete on the online leaderboard. This nicely brings in a global community aspect and you have to complete at least the first 2 levels to get onto that board. If you’re better than that you can achieve an ‘Elite’ level to really push the competitive element.

I think the iball3 is a great gift for kids that have that competitive edge, keeping them occupied for hours – and that can’t be a bad thing. Its excellent for coordination skills as well as trying to beat your mates and family and others around the world and at £19.99 (or less) would make a nice change to a console game.

This entry was posted in games, Gifts, kids and tagged games, iball3, kids. Bookmark the permalink.