The Kids Are Dreaming of Technology – Dream Toys for Christmas

Its that time of year again and the annual list of the top toys for Christmas has just been released by the Toy Retailers Association (TRA). 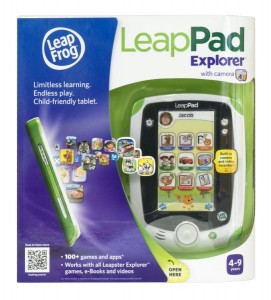 Kids go Techie This Christmas with the LeapPad Explorer

In this year’s list, its technology that takes most of the honours with plenty of interactivity and toys with a twist, but not just ‘ipad for kids’ replicas, more so toys that use technology to function and enrich the game/toy play. For an industry that was worth £2.9bn last year and in the season in which 35% of all toys are sold its hugely important for the retailers and manufacturers to get this right.

This year’s dream dozen include:

Everyone's got to have a Nerf Vortex Nitron Blaster

However, there’s a much more important list this year – the TRA have finally sought out the views of kids themselves to create the ‘Kids Choice Awards’ and tested thoroughly using scales which included:  ‘fun to play’, ‘boredom factor’, ‘coolness’, ‘breakability’ and ‘play with friends’.

The Kids Choice Dream Dozen is:

Without leaving mums out, they were asked to give their seal of approval as well and gave the Mum’s Choice Awards to

Interestingly, only 2 toys made both the Dream Dozen and the Kids Choice Awards – they were the LeapPad Explorer  and Nerf Vortex Nitron Blaster. It’ll be fascinating to see whether the experts or the kids know best. Personally, I think mums know best – last years biggest selling toy in December was the Kidizoom Digital Camera, so this year’s Kidizoom Twist may do just as well. Mums and Dads also hold the Christmas pursestrings and thats probably the most important thing in the toy stakes