Ok, so i’m not always about gadgets.

Sometimes, normality sets in and I do those everyday things like baking.

This last week has been national cupcake week. Now, it doesn’t take much for me to find an excuse to make cupcakes, so it being a ‘National Week’ too, I had to get the mixer out.

I found a fantastic recipe over on the Good Food Channel website for Sherbet Lemon Cupcakes and having a penchant for all things sherbet, as well as being a keen consumer of all retro sweets (translated as – I eat too many sweets), out came my flour, sugar, butter, eggs and lemons.

I won’t copy the recipe here, but the killer component has to be the frosting/buttercream.

Basically, its butter, sugar, lemon juice and the all important sherbet from packets of dibdabs and the result is quite literally lethal – a true lemon explosion in your mouth.

The cupcakes were simple to make, despite veering away slightly from the usual recipe mix I often see (not much butter used in the base recipe) and came out perfectly even in my dodgy oven.

So, not too many gadgets used here – except of course if you, like me, think a Kenwood mixer is a must-have in the kitchen – which it is, and a piping set I bought once in Lidl 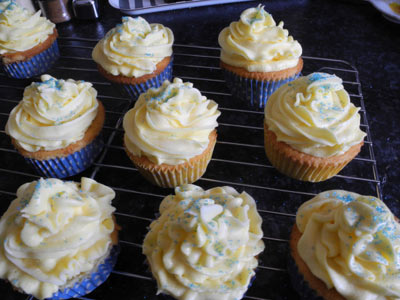 My attempt at sherbet lemon cupcakes for national cupcake week

And here they are!

And yes, there were 12 and now there’s none

This entry was posted in food, General and tagged cupcakes, sherbet, sweets. Bookmark the permalink.