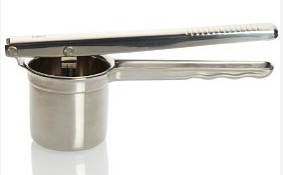 I use an M&S ricer, but most kitchenware shops will have one now

Whenever I made mashed potato, I would always get the same complaint from the other half – yes, it was lumpy. I did everything in my power to de-lump my mash and I added butter or cream or stock to help the process, but nothing I did would fully de-lump it, so I took the matter up with my trusty reference book, AKA the Internet.

On searching Google, I discovered that Americans didn’t have this problem because they used a potato ricer. Hmm a ricer – did I really have to add rice to my potato? It didn’t sound right so I investigated further and discovered it was a contraption that squeezed potato through tiny holes, de-lumping it forever. (and I then discovered my new word – de-lump)

And so my hunt for a potato ricer was on.

Now, at the time, not many people in the UK had heard of a ricer, so my search brought up a number of ridiculously expensive ricers in the UK. Then suddenly,  that little-known chef known as Gordon Ramsey mentioned it on one of his shows as the saviour of mashed potato and as if by magic,  ricers appeared in stores up and down the country – or failing that, Marks and Spencer finally stocked one.

and so, my love of the potato ricer was born. It does indeed produce the best lump-free mash ever and  mixed with butter or cream (and some horseradish or garlic for those that want a little twist to their mash) is divine. So out went the old mashers and in came my favourite new kitchen gadget.

But thats not all (they cried!)

In another one of my potato searches, I was desperate to make good ole hash browns. And lo and behold, once again the Americans have got it down to a tee.  The potato ricer has another use and this one is to dry grated potato. I would usually press grated potato in a tea towel or kitchen roll, but actually putting the potato in the ricer and squeezing will remove the water much quicker.

So for good hash browns, this is a great method of drying the potato quickly or using it to make potato pancakes (or latkes as they’re sometimes called)

– olive oil to fry in

Grate potato, soak then remove as much liquid as possible. Mix with onion, add egg, season well, use about 2 spoons of the mix for each pancake and add to frying pan (olive oil works well)   until cooked – about 10 mins