I’ve been fascinated by ‘robot vacuum’ cleaners for a long time now – years in fact, as I remember when they were launched back in the US and, no surprises, I’ve always wanted to have one. So I was really quite excited when I was asked to review one of them by Neato. 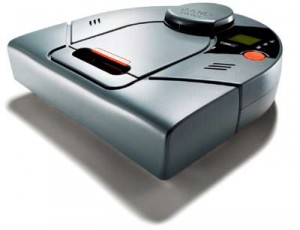 Neato is a US company based in Silicon Valley and the Neato XV-15™ is their first foray into the UK. It uses a unique laser-mapping technology which incorporates a full 360-degree view of a room, allowing it to see its surroundings.  It then maps the most efficient cleaning path by analysing the environment, including walls, doorways, obstacles up to 4 meters away. Wish I could do that – but my clumsiness allows me to trip every couple of feet. Once its happy with its designated area, the clever little robot covers the perimeter first and the cleans inside – a bit like how I do a jigsaw I guess!

If, like me, you’ve never used a robot cleaner, whilst I’m a bit too excited by it, you might be a bit suspect in its actual cleaning ability.  So how does it fare? Can a robot really take the place of us mere mortals? 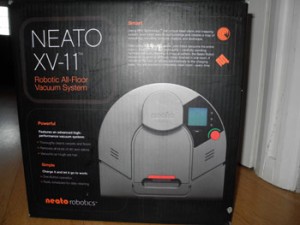 The initial setting up was surprisingly easy. There wasn’t hundreds of different pieces you had to put together, or cables everywhere. Simply take it out the box, find a wall to place the ‘base unit’ and thats basically all there is to it. The base unit acts as the charger and this becomes the robot’s home for its duration, so make it a comfy one – no walls too close, otherwise it gets claustrophobic and won’t function properly.

If at this point you’re reading this and feeling a bit worried about my sanity, fear not! Its just that this little robot is a bit like a pet – we called ours Nero the Neato 😉 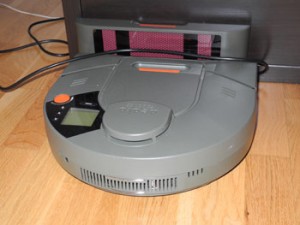 Make Neato's home as comfortable and spacey as possible

The great thing about this robot vacuum is that you can schedule it to clean – not just a daily basis, but any day and any time you prefer – even whilst your out.

It simply disconnects itself from the charging unit and off it runs through your house or flat.

The first time we used it was a bit weird for all of us as the Neato found its bearing around our tip of a house. It took its time, looking in all the nooks and crannies and then just went for it. And I mean – went for it. The little robot took itself throughout the downstairs of our house, under the tables and chairs, around the junk on the floor, cleaning as it went.

It is, like most vacuums, quite loud though, so try to schedule it at a time of day where you don’t actually want to watch the telly.  In fact, I forgot it was even cleaning at one point and almost jumped out of my skin when it decided to venture into the kitchen, where I was cooking. But we didn’t bother each other and I let it carry on with the housework.

At one point, the Neato went quiet – and we actually lost the poor thing. It was quite disturbing to be honest and we had to go on a bit of a search. When we did find it, it was a bit poorly – it had a tissue stuck in it and couldn’t continue. So we removed it and it continued on. This is probably one of the setbacks – it needs an alarm or something to notify the user if there’s something wrong – if its under a table, it can actually be hard to find. 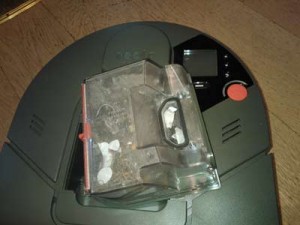 And how was the house? Well, for once, our house was rather clean and tidy. You do have to pick up any small bits before it goes on its rounds, as it can choke a bit, but otherwise, the dust box really filled up after a single clean.

I can’t compare it to other robot vacuums, since this is the first one  I’ve used, but I can compare to normal humanoid vacuums and I must admit, this is all rather impressive. It may miss a few bits and pieces, but then, so do I with a Henry, but otherwise it does a great job and is all rather fun, although pretty expensive.

Here’s some of the functional and technical specs for those that are interested:

The  Neato XV-15 is an excellent robot vacuum although its price is quite steep at £399 rrp. However, if you have no time to vacuum, have health issues, pets or many other reasons, it can save a lot of money in cleaners, time and backpain and I would recommend looking into buying one. Compared with a Dyson that costs between £250 and £350 and is extremely heavy to boot its actually not bad at all –  a lot lighter, cleverer and prettier as well

Neato loaned me the XV-15 for the purpose of this review.  You can order it from retailers such as www.amazon.co.uk