Diets and fitness, two words that I try to ignore but my waist size says otherwise. Like many people, I’ve tried fad diets (most work at first largely because they usually include the important directive – eat less food – regardless of how they package it) and every so often, I’ve tried to improve my fitness.

The tiny fitness widget that records your daily life

So when I was asked to test out the Fitbit, the latest fitness craze from across the Pond that has finally arrive in the UK, I was intrigued. It wasn’t a variation of a stepper or balance pod, or a new dance routine based on the last popular dance routine, it was (you’ll probably guess), a cute little gadget. Well, its more a widget.

The Fitbit is essentially your whole lifestyle in your pocket. If you’ve used the Wii Fit and want something that uses the same kind of technology, but stays with you day and night crunching information about your daily activities, then the Fitbit is what you’re looking for. The tiny unobtrusive device is no bigger than my thumb – and I have small hands. It includes an accelerometer (which is like a pedometer but much cleverer) and an altimeter which measures climbing. 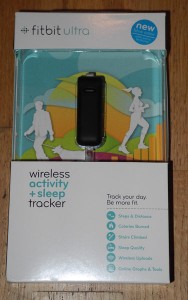 You could be forgiven for thinking Apple manufactured the Fitbit

Already seen as a design classic, the Fitbit has all the hallmarks of Californian minimalist design with its perspex box and flashes of neon colours.

Its already sold over 250,000 devices in the US and there’s plenty of communities and groups to join in with the social aspect. But its the Fitbit’s features that motivate people to get fit and improve their all-round wellbeing. 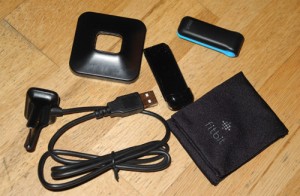 The Fitbit includes a base station and USB plug, wrist band and belt clip

So lets start from the beginning.

When I opened the box, there was very little information about the device. However, despite the lack of documentation or instruction, its highly intuitive. In the box is the Fitbit, a base-station with USB plug, belt clip and what looks like a wallet of some kind – this turns out to be a wristband for when you sleep.

You enter the Fitbit world online, download some free software and create an account at http://www.fitbit.com/start . The whole thing takes a couple of minutes and you’re ready to go. The Fitbit is genuinely tiny, weighs next to nothing and no-one would know its there. I usually clip mine in my bra – the middle or the side. It sounds uncomfortable and strange but I don’t notice it at all and its pretty safe there! Word of warning – when about to show off the Fitbit to a friend, just remember where you put it first – putting my hand down my shirt in the middle of Starbucks was probably not the best idea!

So what does it do? Well, it tracks my steps taken, distance traveled, calories burned, floors climbed and also my sleep patterns. You can also check everything in real-time by pressing the little button on the Fitbit itself and it runs through my daily stats. That really helps with the motivation as you try to beat your step count for the day. It also has some cute motivational comments to get you through the day, although I’m not too sure channeling Cannon and Ball by telling me to ‘ROCK ON’ necessarily works for me!

To track sleep, you start an activity counter on the device when you go to bed, put the Fitbit in the wristband and thats it. Its a bit fiddly because you need to start recording just before you’re about to sleep, but I’m sure I’ll get used to it. The Fitbit tracks how long I sleep and more importantly, how well I sleep by monitoring how many times I wake up during the night and for how long.

Every evening and morning the Fitbit connects wirelessly to my online ‘dashboard’ and uploads the information. You can also recharge it via the base station and it takes about half an hour for a full charge – and lasts about 3-5 days, if not longer. 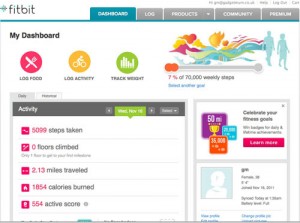 The Dashboard is the Fitbit control centre

But its the Dashboard that really becomes your control centre. It creates a visual map of stats and graphs, charts and logs – giving you a clear picture of how you’re doing and where you want to be. Its a stats fan’s paradise, but its also extremely clear and helpful. You can analyze your day or join the social networking side of things and compare your scores with others 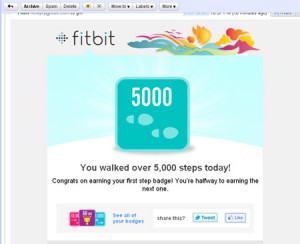 Its amazing how many steps you actually take

You can also log other activities, for example if you’ve gone to the gym  (eg cycling doesn’t register so you’ll have to log that manually), if you currently use Wii Fit you can add that information and you can track your calorie intake. I’ve yet to master floor climbing for some reason so I’m stuck on zero for that, but I reached 5000 steps in my first day and got my first badge – foursquare style! 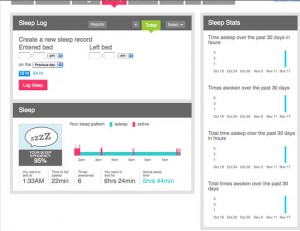 I'm amazed at how many times I wake up at night

I’m fascinated by the sleep patterns aspect. It was interesting to note that in the first night I tracked my sleep, I actually woke up 6 times (Once I knew about when my Little Monster woke me up).

The amount of information you can view is really impressive. The more info you include, the more stats you’ll get back and I can see how this can become extremely addictive. The ‘badge’ system gives you a lot of motivation and just seeing how many calories you burned can give you the added extra you need to help you with your food intake.

It would be nice to have a calorie counter ‘on the go’ since I’m a bit rubbish at entering the foods I ate at the end of the day, but I believe there will be some mobile apps released in the very near future.

However, whether you want to use it to watch your weight, improve your fitness or simply watch your activity levels on a day-to-day basis the Fitbit is a great little tool for this. Its techie without being scary and has a nice user friendly interface, incorporating cute icons that are easy to understand. The Fitbit will retail at about £79.99. That may sound high for such a tiny thing, but I think that’s a pretty good price because it includes the added extras you get with the online experience – the Wii Fit with balance board is nearly the same price but doesn’t have the bonus of taking it with you, whilst at the other end of the market, similar gadgets often on a GPS device usually comes in at about £200+.

As for me – I’m quite loving my Fitbit right now and am highly protective of it – even though my mum is desperate to ‘have a go’! I don’t notice it at all and love reading and analysing the stats.

I will revisit my experience with the fitbit and let you know how I get on.

The Fitbit UK launches online from the 26th of December on Amazon or you can buy it directly via the Fitbit website – the perfect time to start prepping for your New Year Resolutions. It will then be on general sale from the 2nd of January.