I know it sounds sad, but this really is the first year I’ve ever really noticed or taken part in anything resembling Halloween. I don’t mean I don’t get treats for the mass of kids that come round trick or treating but I’ve never even tried to attempt to carve a pumpkin.

It started about three weeks ago when I was at a play date and mentioned it would be so cute to have a small party for halloween. Everyone was so enthusistic and then of course, we all subsequently forgot – until I was shopping the other week and saw all the decorations. I bought a few inflatables and paper plates/cups and texted my friend. She’d also forgotton and has a birthday party that day.

So I’m stuck with Halloween bits and pieces and nowhere to put them. I quickly run off a couple more texts and the makings of a small party starts taking place.

I now have 8 kids coming this Sunday.

I need a pumpkin.

I know nothing about pumpkins – no idea where to start. I pick up what I think looks relatively nice and a £1 ‘carving set’ which is a scoop, something that looks like its going to gouge my eye out and a strange serrated edge. I promptly ignored the carving set and got a proper knife out the draw. 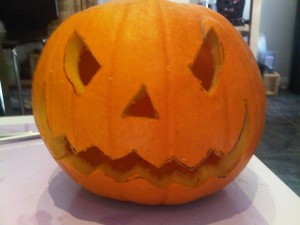 My First Ever Halloween Pumpkin

With google as my friend, we well as some fantastic twitter helpers I set about carving my pumpkin. The scooper was useless, but I found that if I used a knife to criss-cross across the insides of the pumpkin,  the pulp scoops out really easily – a perfect job for the little monster who was having a great time.

And here it is. 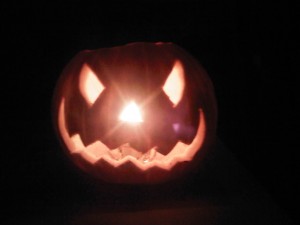 I’m actually quite proud of my pumpkin, even if he does look like he’ll give all the kids nightmares tomorrow.

The real test is to make it a proper Jack O’ Lantern and when the evening came in, the Little Monster was skipping around the room for me to put a candle in.

So she could blow it out.

But it looked even scarier at night and my Halloween party is nearly all set.

There’s a lot of pumpkin templates if you search the Internet, but if your little ones are Club Penguin fans, then Disney have created a great Youtube video, together with QVC demonstrating how to carve a Puffle Pumpkin Lantern

You can download the Club Penguin Puffle Pumpkin template here

What are your plans for Halloween this year?