Not on-topic for the blog, but definitely for the day. 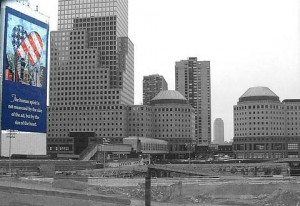 In the Autumn of 2000 I was in New York City. I’d been a few times before and had seen most of the normal tourist sights and I had a day to spare so I started walking south from about 50th/midtown. Downtown New York is a great place and I passed through Union Square, a small protest in Tribeca – about what I can’t remember, Soho, Greenwich Village and thought maybe I should stop. I looked up at some point and saw the Twin Towers of the World Trade center – thinking, now there’s somewhere I’d never been.  Its a long walk from midtown, especially for someone as unfit as me, but I kept going – whether it was the lure of the Trade Center, or the possibility of browsing the chaos that is Century 21 (the only outlet in the City) i’m not sure. But I got to the towers and decided to go to the top – a different view gazing over the Hudson then you get from the Empire State or Rockefeller. 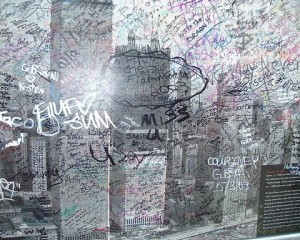 A year later, in September, I was in an office coming back from lunch and went online as usual. Back then, I used to browse the news wires and whatever gave the most immediate news and something came on the screen – Plane flies into the Trade Center.

My American colleagues immediately assumed this was the World Trade Center in Baltimore, where they used to live. It seems bizarre now that they thought this,  almost laughable, but to them, I guess it seemed normal to assume this. 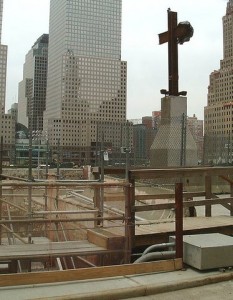 Part of the structure that was left

I refreshed the screen. No connection. Tried other news sites. Most weren’t connecting, overloaded or whatever (this was back in 2001 remember!). The only line we could find was ‘Plane crashes into World Trade Center’. We finally went into the small office and switched on the TV just as the second plane crashed into the second tower.

I’m forever grateful for that free day and long walk I had back in 2000 in New York City.

I lived in the City for 2 years and its a fantastic place with some fantastic people who will forever be scarred by that day but will forever move forward and move on. A great spirit in a great City. 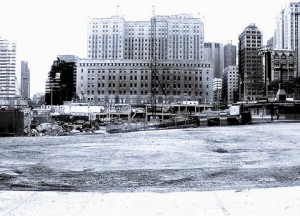 The photos you see here were taken in May 2003 at Ground Zero.

This entry was posted in General and tagged 9/11, ground zero, NYC, photos. Bookmark the permalink.