Remember When – In The Beginning

Now whilst the whole idea of this blog is to concentrate on all types of gadgets, not just techie ones, I do have a soft spot for computers. I’ve gone through a lot and whilst I can’t always remember which Dell I’ve owned or which bits I’ve loaded into a desktop case, I do remember the first computer we ever got.

And this is it: 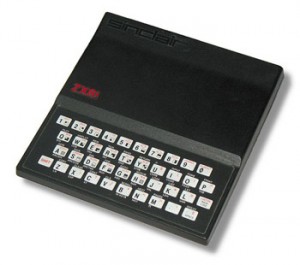 ZX81 - The first computer I ever owned

The wonderful compact ZX81. Probably the best thing about it is that I can never forget the year we bought it. In fact, we didn’t even buy it complete, we bought it as a kit that we had to build. Thinking about it, that was just crazy. We bought our first home computer – something that was new to most everyone – and had to build it ourselves, like a science kit.

But build it my dad did and we had our first fully functioning,  green screen, basic language, tape recorder compatible, PC. It was beyond exciting at the time. Games were loaded via a tape recorder – if you were daring (and I was at that young….ish age), you’d turn up the volume to listen to a mass of unlistenable noise. We had the usual futuristic games of course, like Asteroids (which was essentially block squares built into a ragged asteroids and a line shooter), but we also had Flight Simulator. On the  ZX81. Amazing. It took about 40 minutes to ‘load’ which of course was subject to any interruptions that would crash the tape. So after about 6 days of trying we finally loaded it up and i crashed the plane on take-off.  Every single time. Back to the asteroids I went.

But hey, we had a computer! And my techie gadget obsession was born.

What was your first computer memory? let me know 🙂

8 Responses to Remember When – In The Beginning