Remember When – My Very First Blackberry

I remember a long time ago (over ten years now) I met a guy from  a company called RIM in Canada. He used to work for BT but then became RIM’s only representative in the UK. He showed me this phone device, called a Blackberry, complete with green screen and a screen full of icons. 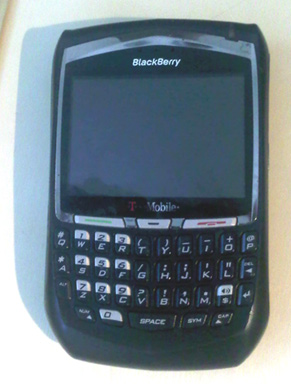 I was so excited to finally have my first blackberry. The 8700g.

As sad as this may seem now, I had never been  so excited in my life over a phone. So just to put this in context, at the time I was working for a large UK company and looking after their mobile products – hence the excitement!

He told me that all the Washington law firms used one of these devices and it was taking America by storm. I had to have one. It was a few years later that Blackberry truly took off over here, but it had sown the seed back then. And so, my love of the blackberry began.

This was probably my first Blackberry, back in about 1996. In all its dirt and glory, this is the 8700g. It was known more as an email device, rather than a phone but the idea of a smart phone was already starting to take off. Small, but chunky, and using a scrolling trackwheel rather than the trackpad-type pointer the new blackberrys have, it essentially took the concept of the fantastic Palm Pilot (remember them!) and added push-email and a phone to it.  And it was brilliant. My thumbs had never been put to so much use, tapping away at its comfortable but tiny QWERTY keyboard.

The Blackberry never really had the coolness factor that the iPhone had when that launched. Thats probably because it was aimed predominantly at the business sector and was hidden from consumers view for a long time. Now, of course, its most popular audience is the teen audience, with its free BBM.

But back then, I worshipped my Blackberry and my emails-on-the-go. I’ve been through quite a few since then and now its a decision whether to stay loyal to the beloved berry, or move on.

2 Responses to Remember When – My Very First Blackberry