I love puzzles. no, I really do. I was a bit of a maths nerd when I was younger and would happily do pages of maths puzzles (really? I’m admitting this?), but I also loved word puzzles and remember going through wordsearch magazines, codewords and I even started to do crosswords (gasp!). However, that was many years ago and to be honest, I don’t do too many puzzles anymore. I think that puzzle part of my brain went missing when I had my Little Monster.

But when Puzzler World got in touch to see if I wanted to review their latest game for the Nintendo DS, Puzzler World 2012, I must admit, a little bit of me jumped like a kid, whilst the rest of me thought – yikes! puzzles! I’m a bit rubbish these days. 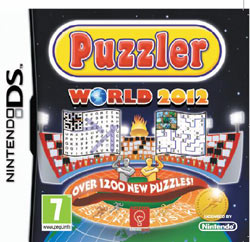 Loads of puzzles to keep your brain twisted

Puzzler World 2012 continues in the same vein as their hugely successful series, with over 1200 new puzzles varying from dead easy to really quite hard.

If you just simply like puzzles, its very straightforward to go into the game and start playing. However, to make it more interesting, there are bonus games to unlock, hints to collect, trophies to win. and challenges to master. With two modes of play, the game offers a standard challenge mode and a much tougher master mode which you unlock as you play.

There’s a huge variety of puzzles on offer, including familiar ones such as wordsearch, crosswords, suduko and codewords as well as some newer formats such as Pathfinder and Suko. I did tend to choose the puzzles I was more comfortable with and would be less inclined to look for one I’d never done before. But maybe that’s just me. Ultimately, if you work your way through the game, you’re going to come across puzzles you’re less confident about so its probably good to try them regardless. 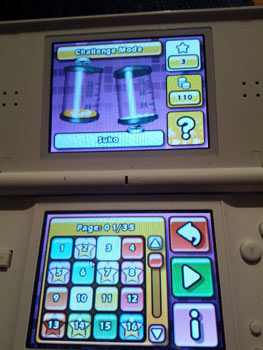 Overall I really enjoyed the game. Its a great ‘pick up’ game when you just feel like challenging yourself. Its very simple to make your way through the gamescreens so if you’re not confident with handheld games consoles, it doesn’t take much learning to figure out how to play.

A big plus is the handwriting recognition tool – a total bugbear for me in some  games! Its absolutely excellent and I rarely, if ever, had an issue with the game in not picking up the letter I wanted to write.

The only negative I would have is that the instructions for some of the games aren’t that clear. There is a manual with clearer instructions on how to play, but the onscreen directions are quite poor. I still have no idea how to play games such as Link-A-Pix and Dropzone and I wouldn’t always (if ever) have the manual with me to reference instructions.

It would also be great if there could be 2-player games and make it more competitive, but I’m sure its something that could be done in the future if Puzzler World decide to go in this direction.

However, i’m nitpicking here. Its obviously not a game for diehard action, strategy, platform or sports gamers. But its a great game for people like me with a few minutes of spare time every so often to pick up the DS and challenge myself every so often.